Guinan At The Milliner 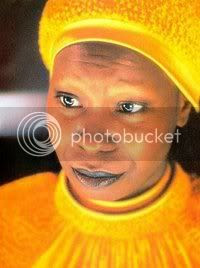 Deanna Troi knows how to annoy the crew.

In between having her chocolate sundaes, she is parading around Ten Forward like a model in those new outfits that Captain Picard let her buy on that budget.

"Why did you let her buy so much?" I ask him as he has another drink. Clearly he is annoyed that Deanna managed to get so much, then saying the shop has a ' no return policy' on goods.

"I just hope the Admiral doesn't find out." Jean-Luc continues, "He will think the cash is for a fleet of shuttlecraft."

Still, if Deanna can do it, so can I.

"Captain, I need new outfits as well, and in particular new hats."

Jean-Luc groans and almost chokes on the salted peanuts he was eating.

"Not you as well, Guinan!" he exclaims.

"It's only fair." I tell him, "I have to be here for the crew all the time in Ten Forward. I need to look smart."

A few hours later, I am in the Starfleet Mall after I got the budget from Captain Picard, who was mumbling about Starfleet won't be able to afford to build any starships for the next year now.

I head straight for Millicent the Milliner, the leading hat specialist of the Federation. I get all of my headwear from them.

In fact, I probably keep them in business.

When I enter the shop, Millicent moves forward. 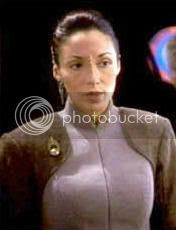 "Guinan!" she tells me happily, "I'm so glad you came, The accountants said we needed to get some extra money this month. With you here, I'm sure we'll be able to."

"What new hats do you have for me, Millicent?" I ask.

"Oh, we have some super original designs." she replies, "Many that no one else would wear...I mean no one else has worn. Really eyecatching."

I think I hear Millicent's assistant laugh slightly at this remark.

She urges one of her assisants to bring out a large red hat. 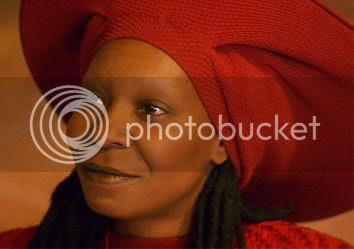 "Now this model is called 'The Starship', Guinan." Millicent explains, "I'm sure you'll love it."

I hear one shop assistant whisper to the other, "It's called that because you can land a starship on it!"

Millicent rebukes them for it, Despite their remarks, I decide to order it. There's nothing like an enormous hat!"

I order a few other hats, and she arranges to have them sent to the Enterprise. A few hours later, I am in Jean-Luc's Ready Room with Deanna.

"You two realise what you've done with your clothes buying over the last few days?" he says, "Starfleet can't afford all this."

Beverly enters, wearing a beautiful new Starfleet outfit. She fails to see Deanna and myself. 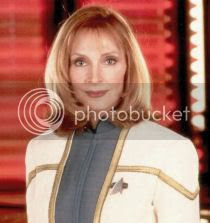 "Thanks for this fab new outfit, Jean-Luc." she says, "You're so generous in letting it come out of Enterprise expenses."

The Captain keeps urging her not to say anything, but it is too late, and we both know.

"Yes, thank you, Captain!" Deanna and I both say with a smile, as we leave the Ready Room.
Posted by Guinan at 18:17

The Mistress of the Dark said...

Go ladies! Now it's my turn! Hey Captain how about it!

How many hats does Guinan need anyway? It seems she already has enough to fill a starship.

Okay, so horrible news, my entire wardrobe didn't survive the winter cleansing, and it's spring, and I have...

So. What's my budget and how do I get to the Starfleet Mall?

I agree that it is now the Captain's turn. It is only fair.

Face it Captain. You've been cornered by Retail Rodeo! I love all these beautiful women! "Hey Beverly! Can I interest you in a visit to the desert in Phoenix?"(One can always hope):)

MOTD, I'm sure Bev, Deanna & Guinan would welcome you as a shopping companion.

Jon, you want to be sure Guinan doesn't hear that.

Titania, I don't think I get a turn.

I'm sure I've heard that line about the store not taking refunds somewhere before...

The description of the large red hat hardly does it justice! Now imagine another version in NCC 1701-D blue/grey - that would be a wow (but would need another outfit from that store as well, I suppose).

Michele sent me across the galaxy today to say Happy Easter.

An Easter Egge Bonnet would make a lovely addition.

sad that Millicent doesn't wear her creations - Easter bonnet would have been nice!

Michele asked me to drop by!

(ps what is this Open ID thing that doesn't allow me to comment in my blogname, only in the title of my blog? very strange)

Michele and I were in Ten Forward only recently, and commented on Guinan's new hats..... :-)

How generous of you, Capt, to fund the new wardrobes of your female crew - good for Morale too....

that is one big hat.

Jean Luc, don't say I didn't tell you so but "I told ya so" I knew letting Deanna anywhere near a shop with any sort of budget was FATAL.

Hmmm it looks like the women of the Enterprise are people I need to go tag along with shopping. I don't wear hats but I could do with some clothes.

Personally, I would much rather go look at computers than clothes shopping. Do you have a budget for tech gear?

I really think you need to have a chat with the replicator programmers so that you can get the more current fashions without jeopardizing the security of the Galaxy.