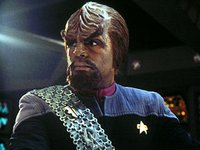 "The indignity of it!" I angrily say as I storm back into the quarters that my wife Jadzia Dax and I share.

"Whatever has happened, Worfie?" she asks me, and gently rubs the bruises that I have.

"For the first time, I have been defeated by a WOMAN in a skilled competition. The Enterprise martial arts tournament was taking place and I was drawn against Jennifer Baxter."

"Yes, well I thought she might be slightly tougher than the average woman, but still an easy victory." I tell her, "Anyway, before I know it, I was on the floor and Jennifer was victorious.." 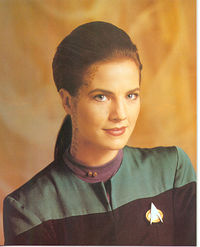 "Oh dear..."she repeats,  "Well, Jenny is a trained fighter, and works out every day. She is toned, muscular and has taken on many in the past."


"Granted." I answer, "But she still should have been defeated by me!"

"Maybe err..." Jadzia hesitantly suggests, "Maybe you're getting a little old for that sort of thing? Jenny is young and fit, while you have been doing it for a while."

"Jadzia!" I exclaim, "I am a Klingon warrior, trained to fight the hardest of opponents right until old age. Klingons do NOT get old for fighting!"

"Sorry, Worfie." she answers, "Do you think you are hurt because you underestimated Jenny, and planned to gently defeat her? It sounds like she went for the quick flourish, hoping the surprise would defeat you."

"You may be right, Jadzia." I say, thinking carefully "Had we fought normally, I would have defeated Jenny easily. It is not an honourable way to win. Klingons have a Code of Honour which they abide by. Jenny does not."

I walk out again, satisfied that it was not a fair match I lost in, but think I can still hear the sound of my wife giggling as I do.
Posted by Worf at 14:00

I'm not sure of Jadzia's sincerity on this... but I'll buy it. Yes, that sounds about right to me.

Getting older, just live with it Worf, it comes to us all.

Your wife giggling is a cause for celebration of Victory, indeed! :)