Enterprise For The Scrapheap? (Part Three) 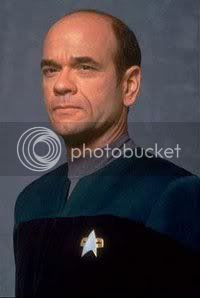 With the entire Enterprise staff beamed on to another planet, the holo entertainer Vic Fontaine and I are trying to save the ship from being taken to a scrapheap by the Myranians, a most unpleasant race who really only want the metal and parts for their own use.

Personally I wouldn't mind, but my program is embedded in the ship, and I have been promoted to Emergency Command Hologram for this mission. A status I rather like, as I can boss someone around, even if it is just a holographic singer.

"What are we going to do?" shouts Fontaine in desperation, "If we don't take out the other five Myranians, us and the ship will be sold as scrap to a merchant." 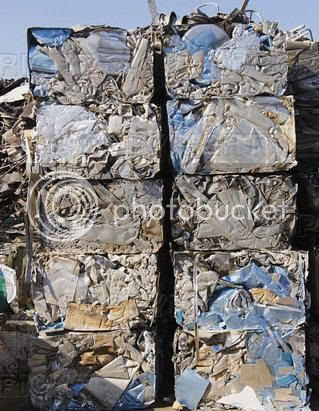 "Then we have to act quickly." I answer, "Let's go to Engineering."

We open the doors to see two of them working on a screen. They turn round and fire powerful weapons at us. They pass right through us, but both of us start to flicker.

The holo emitter was hit! Isn't that always the way? Why are they put in such prominent places.

Fortunately, our disruptors strike them and finish them off, and we run out of Engineering before we disappear.

"We just made it into the corridor." I say, "Let's get the other three. This will be the most difficult, there being so many."

"I'd rather be singing I've Got You Under My Skin right now." complains Fontaine.

"You're getting under my skin right now." I retort, "Let's get the job done."

It's sometimes hard being in command when your subordinates are troublesome and whine a lot.
Instead of taking the turbolift, we decide to use the element of surprise and beam ourselves in with guns blazing, like cowboys and their six-shooters in the saloon.

We both appear on the Bridge, firing our disruptors at anything that moves. 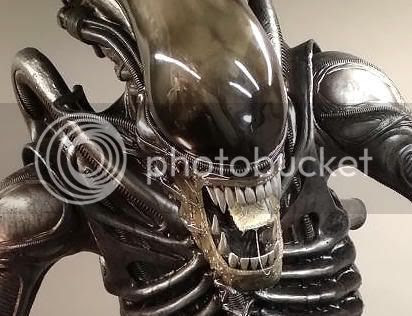 "What..." the Myranian sitting in Captain Picard's seat said as he turned round.

It turned out to be the last thing he said. The other two get destroyed with ease with our six shooters...I mean disruptors.

Several hours later, we arrive at the planet where the beaming signal came from, and all the crew are returned to the ship.

"Well done, Doctor and Mr Fontaine." says the Captain, "You did an excellent job of saving the ship, "Had we lost the ship, we would have had to pay for a new one out of our salaries."

Never mind that I would have ceased to exist!

"You did really well." she says with praise, "The Captain will put you back to being a normal EMH again. The burden of responsibility is tough. I know you wouldn't like to be a permant ECH."

Thanks for asking! As if I have any say.

"Jean-Luc....I mean the Captain and I will be going to the cinema tonight." she continues, "So you'll be on bedpan duty during that time."

Sure. That's what all heroes have to do!

Mimi sent me a meme regarding her 'Message In A Bottle'. See her blog for the rules. This is my bottle: 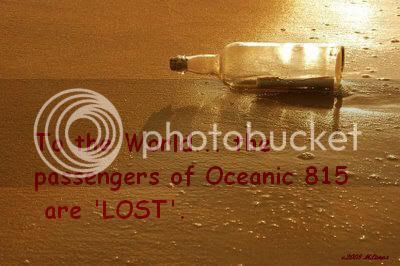 Retaking the Enterprise was pretty simple for a ECH. Maybe he should get more opportunities to command sometime...

I'm having a good time picturing the doctor and Vic arriving on the bridge with guns a'blazing!

Oh SO exciting: 600 posts! Looking forward to it.

Cheers on your 599th, Captain! A fine BLOGSITE as well!! I found it amusing that an "Al Martino" of outer space had a role in saving the ship. Come to think of it, if you hear the main "Theme from the Godfather" with the mandolins playing over the public address system, don't be alarmed. You may have a Mafioso on board!!!!;D Let me know if this is the case and I'll beam up a "Goombah" to keep things in check!!

Your message bottle is now afloat in the vast blogosphere ocean. You are Message In a Bottle #229.
Feel free to toss in a bottle whenever you feel the urge to send a message. The blog ocean is always open. You never know what might wash ashore.

Perhaps our holographic doctor retains a souvenir phaser from his moment of glory as an ECH which can be set to "vaporize bedpan contents" instead of "stun."

Those holograms have plenty of personality and pluck. And I might add, if the Captain and crew could pay for a new ship out of their salaries, then they're paid a lot better than our current military! But I suspect the Captain was just being wry.

Utenzi, we have to pay over several years and out of our pensions.

Curmudgeon, the Doctor would do that!

Michael, I'll look out for any stray Mafioso.

Jon, don't let the Doctor hear you. He complains enough as it is.

Happy blogaversary, Captain. I'm so glad that you've been able to share your unique vision of this seminal world for going-on 600 entries. Lucky us!

Dropped by from Michele's to share in the happy.

I was hoping he'd get some respect finally...

You must be getting a huge salary to be able to pay for the new ship within a few years!
Happy weekend!
I'll be back tomorrow. :)

Are you a Lost fan? My husband and I are both fans. There was one season I was ready to give up on the series. But last season they gained my attention back. :o)

Bed pan duty? What a thrill!! DON't they have tubes or something like in the space shuttle?

Titania, I'm a Lost ADDICT, rather than a fan!